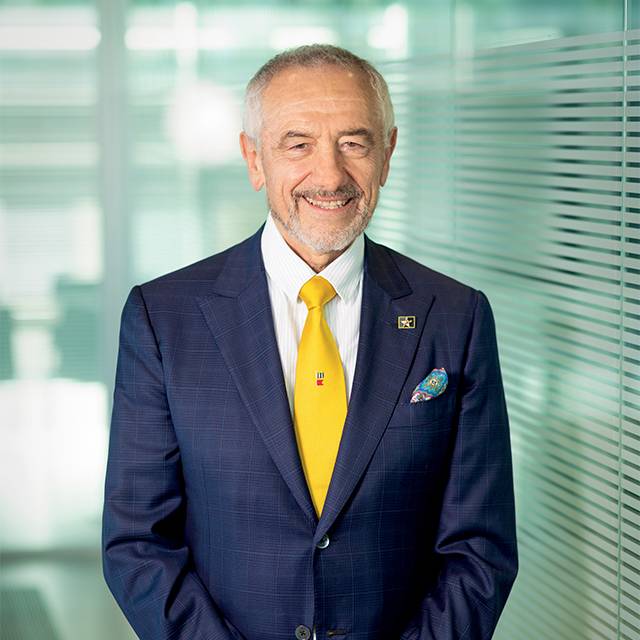 GIANPIETRO BENEDETTI
CHAIRMAN
Gianpietro Benedetti started his career at Danieli & C. in 1961, after graduating from A. Malignani Technical Highschool, (Udine, Italy) as a design engineer in one of the technical offices. In 1963 he became a project engineer and by 1966 he was plant start-up engineer. With 1968, he was promoted to manager of the Rolling Mill Process and Roll Pass Design offices and by 1976 to the Sales Director, becoming also the Research & Development Director in 1982. He was appointed Danieli Group Managing Director in 1986, 5 years later he ascended to Group President and CEO. Since October 2003 he has been the Chairman of the Board of Directors of the Danieli Group. On September 26, 2017 he was appointed Chairman of the Executive Board of Danieli & C S.p.A. and in 2020 he assumed the role of the Chairman of the Group Executive Board. With many years of experience leading the company, he maintained the corporate heritage, guided a transformation process and established a path towards continuous growth. He has been a member of the Board of Directors of Acciaierie Bertoli Safau S.p.A. (Italy) since 1994 and of Friuladria Bank (Crédit Agricole Group) from April 2013 to December 2018. Also, a former Member of the Board of Directors of Friuladria Bank (Intesa BCI Group). Gianpietro Benedetti has received honorary degrees from three different universities: in 2000 in Mechanical Engineering from the University of Trieste, in 2006 in management engineering from the University of Udine and in 2018 for International Business from the MIB School of Management of Trieste. With strong beliefs towards the regional education system, he is the president of “ITS – Technical Secondary School – New made-in-Italy Technologies, Mechanical and Aeronautics Section” of Udine since September 2010. In June 2006 the National order of Chivalry made him a knight of the Order of Merit for Labor, for the service to Italian Republic, the highest-ranking honor awarded for “merit acquired by the nation”. In 2018 in recognition of his leadership in steelmaking technology and plant building over four decades, he received the Tadeusz Sendzimir Memorial Medal from AIST (Association for Iron & Steel Technology, U.S.A.). In December 2020 he was appointed Chair of the B20 Italy 2021 “Employment & Education” Task Force. In addition to the MI.DA® Micromill, Gianpietro Benedetti is the holder of other numerous patents for steelmaking machines and processes and over 80 inventions have been registered under his name.
GIANPIETRO BENEDETTI
CHAIRMAN 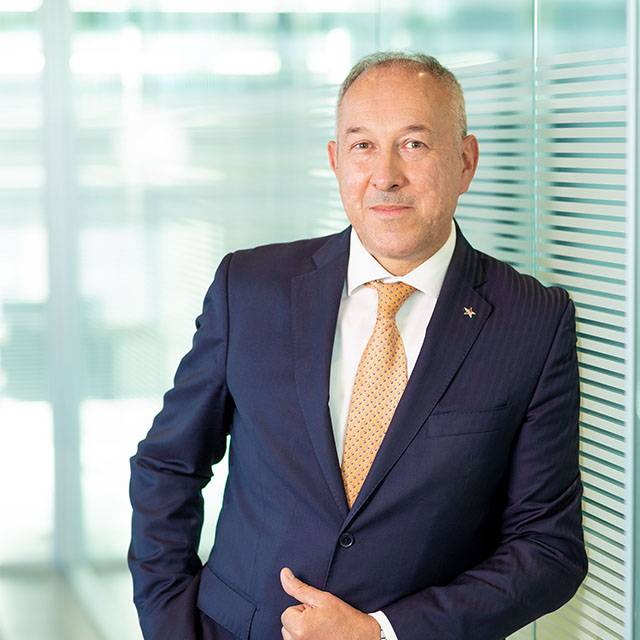 ALESSANDRO BRUSSI
Vice Chairman and Group CFO
Alessandro Brussi earned two degrees: in Business Economics in 1986 and Political Science in 1990, at the University of Trieste, Italy. After working as a researcher at the University, he was employed by the auditing company Coopers & Lybrand for a few years, where he performed mandatory certification of financial statements for companies such as Assicurazioni Generali and Fincantieri, as well as the duties of senior analyst in both national and international merger & acquisition transactions. Since 1991, he has been working in Danieli & C., where he performs the administrative, accounting and fiscal duties. He has been appointed as officer in charge of the corporate accounting documents, administrative/financial duties for the parent company, the consolidated financial statements for the Danieli Group, and relations with subsidiaries and affiliates. He is also Risk Manager and Investor Relator. In 2015 he became a member of the Board of Directors of Danieli & C., earning further executive powers. Since 2017 he has been a member of the Danieli Group Executive Board.
ALESSANDRO BRUSSI
Vice Chairman and Group CFO 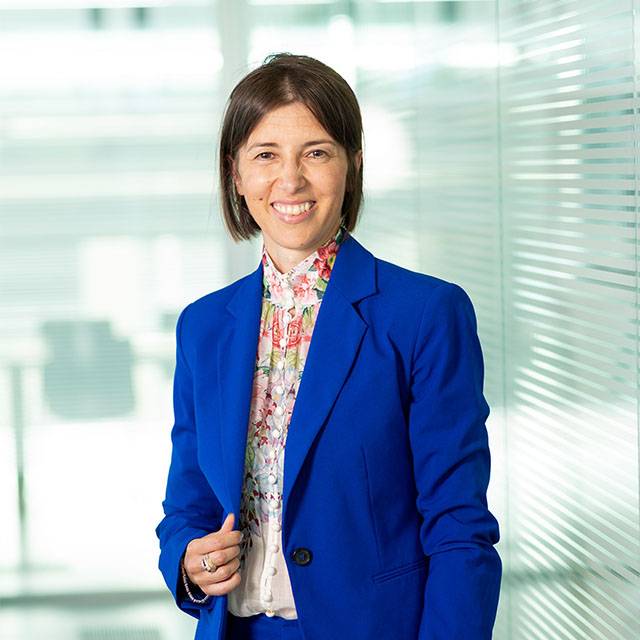 CAMILLA BENEDETTI
Vice Chairwoman
Benedetti Camilla studied at the Università Cattolica del Sacro Cuore, where she earned a degree in Economics and Management. Before joining Danieli she worked at Ernest & Young, primary as an auditor assistant, then as a senior auditor. Her duties were to ensure the accuracy of the company’s financial reporting and budgeting and to coordinate the customer-facing auditing teams. She started her career in Danieli in 2008 as a Management Controller for the European and American subsidiaries. Subsequently she was promoted to Operational Coordinator for the Compliance Project responsible for analyzing, monitoring and defining the remedial actions regarding the company’s flows and processes. In 2012 she became a Head of Accounts Payable Department and Cash Office. In 2015 she was in charge of Organizational Development of the Danieli Group in the field of Human Resources with a mission to define the human capital management process in terms of organizational development and training. In 2016 she elevated to the position of Head of Human Resources. She has been a member of the company’s Board of Directors since 2015, member of the Board of MIP, Polytechnic of Milan - Graduate School of Business since 2016 as well as member of the Scientific Committee of the MIB in Trieste - Graduate School of Business, and today she holds a positon of the Board Director of the same school. The company appointed Mrs. Benedetti as Vice Chairwoman of the Board of Directors in 2017.
CAMILLA BENEDETTI
Vice Chairwoman 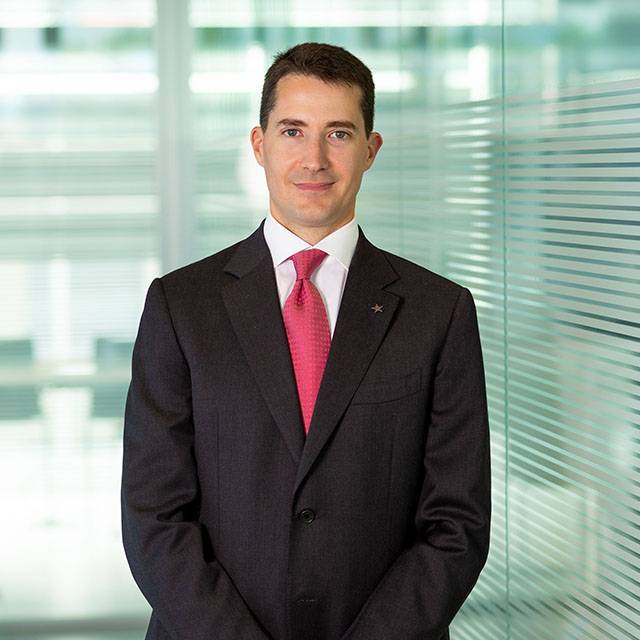 GIACOMO MARESCHI DANIELI
Group CEO
Giacomo Mareschi Danieli graduated in Electrical Engineering at Polytechnic University of Milan, Italy in 2005. His career started at the Danieli Group steelmaking division Acciaierie Bertoli Safau (ABS), focusing on a deeper understanding of the steelmaking process. Later, he spent different years on Danieli construction sites worldwide, including three years in Abu Dhabi and two years in Ukraine, assuming his first the role of project coordinator and then becoming site manager, responsible for the Interpipe Project. Next, he joined the Danieli Thailand team, the largest affiliate of the Danieli Group at the time. This experience culminated with his appointment as CEO of Danieli Thailand in 2012, focusing on the improved efficiency and specialization to compete in the SEA market. In 2015 he returned to the group headquarters and took over the management of the Danieli Plant Engineering department, aiming to consolidate the commercial activities for multi-product line projects, meanwhile managing product lines such as Cranes, Hydraulics, Environment, and Centro Metallics. In 2009, he became a member of the Board of Directors of Danieli & C. and since 2017 he has been a Chief Executive Officer of Danieli & C. and member of the Danieli Group Executive Board.
GIACOMO MARESCHI DANIELI
Group CEO 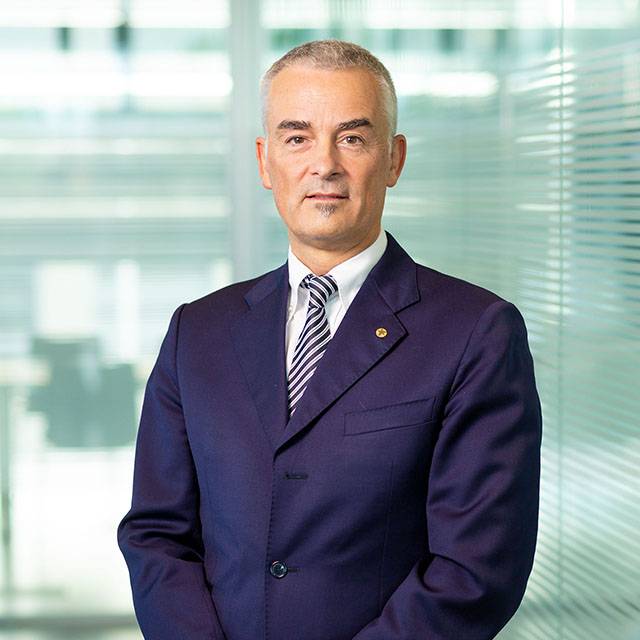 ROLANDO PAOLONE
Group CTO
Rolando Paolone graduated as a mechanical technician at A. Malignani Technical High School, Udine, Italy in 1981. He has been in Danieli & C. since 1985, starting as a design engineer in the Long Product Hot Rolling Mills Division (Danieli Morgardshammar). He took on the title of Design Office Team Leader in 1989 before being promoted to Design Office Manager of the Rolling Mills Finishing Area in 1994. In 2001 he was promoted to the position of Technical Director for the Hot Rolling Mill Division for Long Products. In 2006 he was in charge of the Process & Technological Department for the Long Products division of which he was appointed Executive Vice President in 2008. In 2014 he became Danieli Research Center Executive Vice President and earned in 2017 his current position as Chief Technology Officer of the Danieli Group and member of the Group Executive Board.
ROLANDO PAOLONE
Group CTO 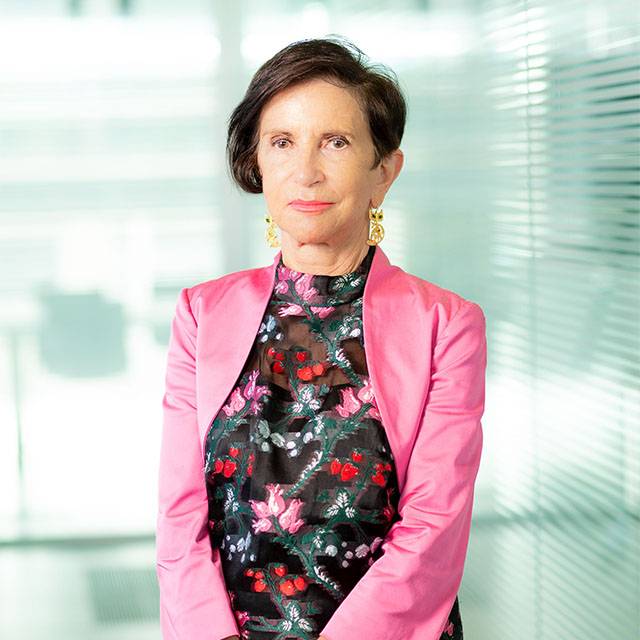 CARLA DE COLLE
Chairwoman - Steelmaking
Mrs. De Colle has been with Danieli since 1963. Her role in administrative and accounting sector was expanded when she took the position of the Head of Industrial Accounting and Management Control of the company. In 1981 she was commissioned to set up and launch the Production Planning System starting from the Machine tool operations up to the Assembly lines for the steel industry plants. In 1982 she was appointed to Company Executive. In 1984 she became General Manager of Danieli Natisone, a subsidiary which sells and designs cold finishing lines. In 1991 she assumed the position of Deputy General Manager of the Danieli & C. that put her in charge of production, Purchasing Department, Warehouses and activities related to incoming semi-finished parts and shipping of pre-assembled plant parts. In 1999 she was appointed Member of the Board of Directors with executive powers. She has been Chairwoman of the Acciaierie Bertoli Safau SpA since 2003 and she held a position of Deputy Chairwoman of the Danieli Group from 2003 until 2017. Mrs. De Colle takes an active role in passing decisions as a representative of the Board of Directors and Group Executive Board.
CARLA DE COLLE
Chairwoman - Steelmaking 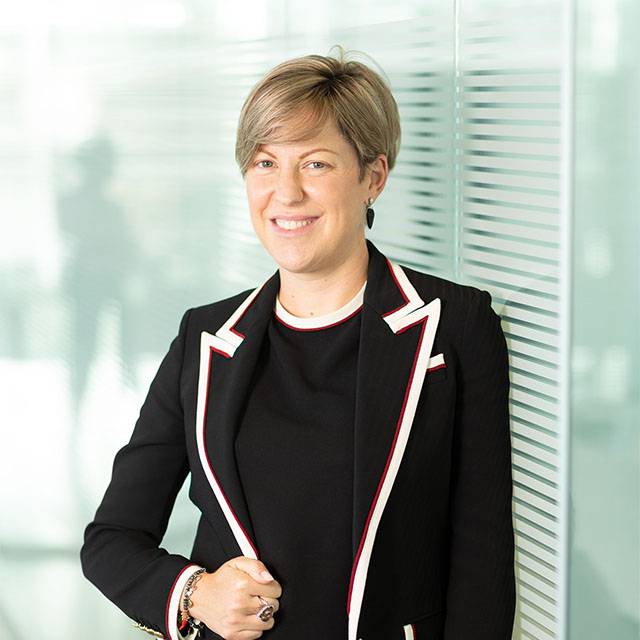 ANNA MARESCHI DANIELI
Vice Chairwoman - Steelmaking
After receiving a degree in Business Administration from the Bocconi University of Milan in 2004, Anna Mareschi Danieli began her career at MP Banque in Paris, after which she moved on to the position of Financial Analyst at UMCC of the Unicredit Group. In 2007, Mareschi Danieli joined the Danieli Group, holding positions with increasing responsibilities. In the following years she headed the Finance Department. In 2008 she became a member of the Board of Directors of Danieli India in Chennai, a position she continues to hold today. In 2017 she was elected President of Confindustria Udine, and since 2018 has held positions of importance in the region as a member of the board of directors of Fondazione Burlo Garofalo, Fondazione Cro di Aviano and Promos Italia S.c.r.l.. She is also on the Executive Board of the Chamber of Commerce, Industry, Agriculture and Artisanship (CCIAA) of Pordenone and Udine. Since 2019 she has been on the board of directors of Insiel S.p.a., I.TER Scarl and Università degli Studi in Trieste. Nationally, she has been on the General Council of Confindustria since 2018 and a member of the board of directors of Simest since 2019. Recently appointed in 2020, Mareschi Danieli is currently Vice-Chairperson of ABS – Acciaierie Bertoli Safau SpA), the steelmaking division of the Danieli Group, and is directly in charge of the Finance, Administration, Management Control, IT and Legal departments.
ANNA MARESCHI DANIELI
Vice Chairwoman - Steelmaking 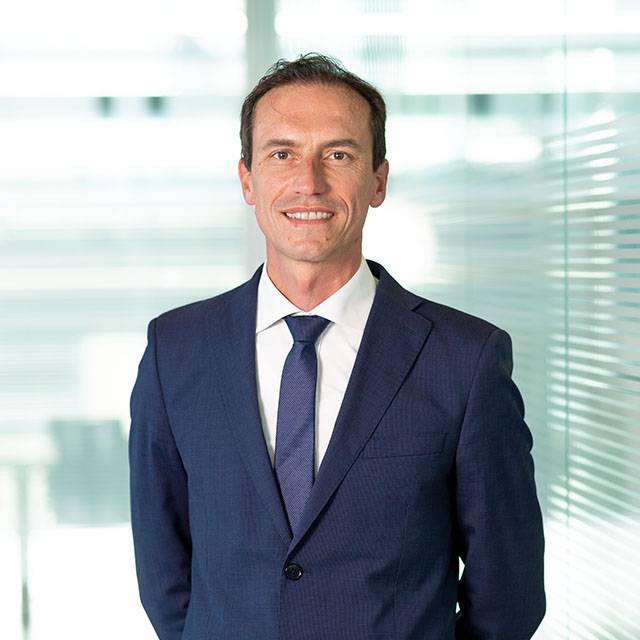 STEFANO SCOLARI
Chief Executive Officer, Steelmaking
Stefano Scolari graduated as a technical sales engineer at Giorgio la Pira High School. He joined the Sales Department of Acciaierie Bertoli Safau (ABS) in 2003 bringing with him 6 years of sales expertise gained at Lucchini Siderurgica. As sales he played an important role in creating opportunities in emerging market for forged and molded products. In this role he was able to follow and contribute to the growth of ABS by acquiring competencies in his field of reference and in customer relations that brought him to the position of Marketing Director in 2014, where he remained for two years. In 2016 the company appointed Stefano Scolari to lead its growth efforts as Sales Director while following the strategy to provide strong customer focus. In 2018 he was promoted to Chief Business Development Officer. His duties included management and coordination of sales activities, operations of programming and logistics, quality assurance as well as management of the ACM research center in Metz, France. In July 2020 he was elevated to his current position of Chief Executive Officer.
STEFANO SCOLARI
Chief Executive Officer, Steelmaking 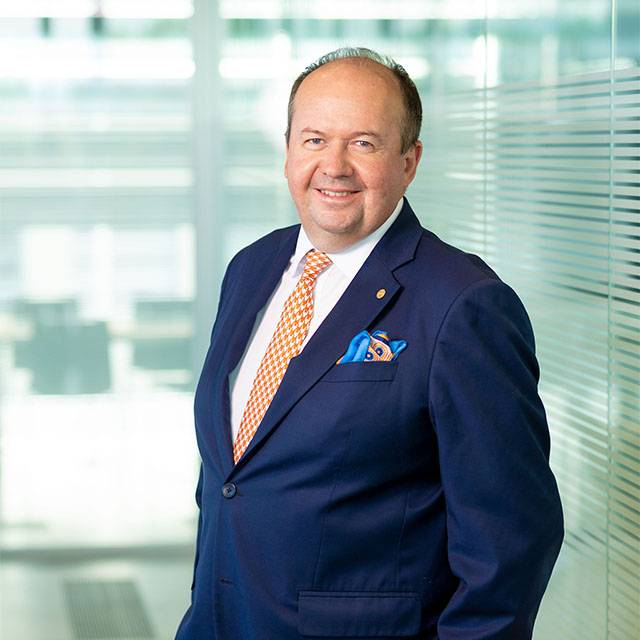 ANTONELLO MORDEGLIA
Chairman Danieli Automation
Antonello Mordeglia graduated in Electronic Engineering at Assumption University of Bangkok, Thailand in 1996. He worked for 11 years at Ansaldo Industria as a HW design engineer and start up engineer in marine, paper, cement, metals industries. In 1992 he moved to Thailand as a branch manager of Ansaldo. In 1996 he transferred to ABB as an Asia Pacific Regional Manager. In 2000 he joined Danieli Group as a Central Sales Manager for South-East Asia and between 2004 and 2012 he became responsible for Danieli Group Central Sales. In 2013 Mr. Mordeglia moved to Danieli Automation and he was appointed Chief Executive Officer. Thanks to his 14-year experience he has been appointed to lead the Danieli Engineering Japan, that functions as an excellence center for project management and engineering development for the Danieli Group. In 2004 he was nominated a Knight of the Republic of Italy and in 2017 he was awarded the Honorary Degree in Engineering, Electrical Energy and Systems from the University of Trieste. Since 2017 he has been a member of the Danieli Group Executive Board.
ANTONELLO MORDEGLIA
Chairman Danieli Automation
BOARD OF DIRECTORS
GIANPIETRO BENEDETTI
Chairman
CAMILLA BENEDETTI
Vice Chairwoman
GIACOMO MARESCHI DANIELI
CEO
ALESSANDRO BRUSSI
DIRECTOR
CARLA DE COLLE
DIRECTOR
CHIARA MIO
DIRECTOR
GIULIO CAPOCACCIA
DIRECTOR